Oh, happy day – LAND!!! Large tourist parks like Gumbalimba are wonderful, with all their ziplines, lush nature paths and organized outdoor activities. They’re lots of fun and everything is clean and well-maintained. 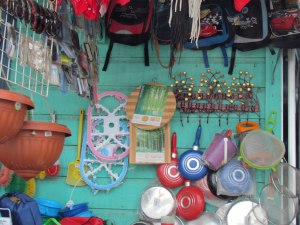 We’re not going that route. We hope to experience the real island while putting money directly into the local economy so, we head to the queue of taxis. Even though there is access to electricity, running water and (even) cable TV on the island of Roatan, Honduras is considered to be one of the poorest of Central American countries. (If you visit, don’t forget the bug spray as sand fleas are ferocious! One flea bite that got through the spray stayed red many days after.) The manager of the taxi company asks drivers, one-by-one, if they speak enough English to be our guide. Finally, he turns to us and says it’s our lucky day. HE’s going to take us around the island! So, off we go with our new friend, Rubin.

A local sanctuary called Mayan Eden is just off the main road. It’s not pretty, but in a very natural state. It’s small, somewhat rundown, but there’s a lovely dock further down the path.

Iguanas are lazing about – munching on leaves, sunning on the ground, on the roof of a shelter, in the trees. We feed a few, but politely decline an offer to hold one.

There is a small enclosed butterfly farm on the property, but it rained earlier and we don’t see many. The flowers are fresh and shiny from the recent soaking.

We wander down to the dock, where a young man points out an octopus that’s changing color, right before our eyes! Sorry for the watery image. I tried to sharpen it as much as possible.

Our guide points out a local favorite, the Monkey Lala lizard. I take a quick shot, as they move fast! Remember the National Geographic commercial, where a lizard skims effortlessly over the water in a standing position? That’s the striped basilisk lizard, also known as the Jesus lizard or Monkey Lala. It has special feet and a crazy running technique that keeps it from sinking as it races across the water. There’s more about it at natgeojesuslizard.

Monkeys are more our style. One, a black spider monkey named Hannah, leaves muddy tracks as she runs up my leg and jumps into my arms. The guide says she prefers women. She curls up, snug as a baby. When we leave, they pry her out of my arms. “Bye, Hannah.”

Rubin takes us to his favorite view of the island after stopping by the roadside to get a bag of his son’s favorite snack. It’s a hairy looking ball with yellow tinged spikes. He insists we try some. Mmm … tastes just like a plump Chinese lychee!

Lunch at one of Rubin’s local hangouts, Bayside Restaurant & Grill. The restaurant is in the grittier part of Coxen Hole, but it gives the restaurant atmosphere.

Rubin drops us off and we take a short stroll through Mahogany Beach. There are lifts to take tourists over, food and drink, row-on-rows of beach chairs and outdoor games.

On board, we clean up for a very special show. A Las Vegas magician is brought in to dazzle us with flashy moves and cool illusions. Again, “No pictures, please.”

We sit next to Jeremy, a crew member who wears many hats, as they often do. The former architect from Australia is an example of the scope of professions from which cruise staff migrate. He followed his passion and now travels the world!

I’m truly enjoying the design and layouut of yur blog. It’s a very easy on the eyes which makes it muich more pleasant for me to come here and
visit more often. Did you hire out a designer to create
your theme? Exceptional work!

Thank you for the encouraging words! I use the free theme templates that WordPress provides. They are easy to apply and easy to change out.

Just want to say your article is as astonishing. The clarity in your post is simply cool and i could assume you’re an expert on
this subject. Well with your permission let me to grab your RSS feed to keep
up to date with forthcoming post. Thanks a million and please continue the enjoyable work.

You are very kind! I just enjoy sharing what I learn from experiencing different cultures and reading about them. Thank you for joining me!

Hi Soo!! Thanks very much for forwarding this link to me! I had a great read of your journey with us, thanks for coming onboard with us on the Magic and being such a fun and enthusiastic guest! I appreciated your zest for travelling, photography and journaling! Keep on blogging!