Bye-bye La Antigua, hel-l-o Panajachel! “Pana” is one of several villages surrounding lovely Lago de Atitlan. Atitlan was once a volcano. It’s now filled with water and is such a peaceful lake.

Our room at Utz Jay is a big room compared to others we’ve had. Windows have great views of the gardens. The water is hot with good shower drainage.

We start chatting with a couple on the main street. Sheila & Brian have a non-profit in town. They are dining at Chinita’s Chinese Restaurant tonight before going to Circus Bar to listen to flamenco guitarists. They invite us to meet them.

Lonnie stops for a slice of German Chocolate cake, Guatemalan style, at Cafe Kitsch. Not bad. A guy next to us strikes up a conversation. He says his girlfriend works at Chinita’s. What a coincidence! He also says today is the start of Chinese New Year. We forgot! It’s the Year of the Horse! What better way to celebrate than with food?!? 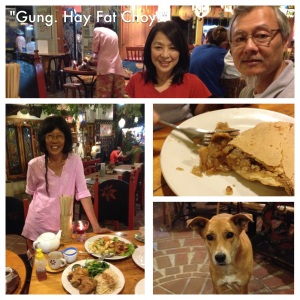 Dinnertime! Chinita’s on the main road. She came years ago and never left. Charlie, a guy from our shuttle in, join the table.There is no New Year’s special on the menu, b-u-u-u-t … they are preparing a special meal for the kitchen crew. We beg Chinita to sell us an order. Boy, it’s just like eating at home! We send the kids greetings from Panajachel.

Bill, a local, is tonight’s entertainment. Lonnie requests Don Ho’s “Tiny Bubbles.” Bill invites me to duet and I do! Dogs, street vendors and a kid asking for money wander in and out.

Later, we join Sheila & Brian at Circus Bar. It’s really more of a restaurant than a bar and is the oldest such place in Panajachel. There’s another one in Antigua, but it’s not as much fun!