Did you wonder what happened to me this year? Did you think I dropped off the face of the earth??? I admit it. There wasn’t much reaching out this year, but I’m still here. Really. I am.

For one thing, I became more active on Twitter. Quickly posting 140 character tweets, including images, is so freeing. And I learn lots by following amazing people in various fields of interest. I even won an ASUS tablet on Twitter! (Tell you about it in another post.)

The second reason is because we have been traveling quite a bit. Often, in my posts, I try to research places or subjects I mention to give you interesting tidbits and facts. That requires a little more thought and planning, which can be difficult to do when we’re on the go.

This has been a wonderful year! A blessed year! A year of thanksgiving!

A little one has come into our family and enriched our lives immensely. And to add to that, my husband and I have taken more time to travel our beloved United States and beyond.

We visited Ice Land at Moody Gardens in Galveston, Texas. It was 9° inside! They brought in a team of experienced ice sculptors from Harbin, China. Also known as ‘Ice City’, Harbin is the acknowledged cradle of ice and snow art in China and is famous for its spectacular ice and snow sculptures.

The Moody Gardens theme was a SpongeBob SquarePants Christmas and went into the first week of 2015. 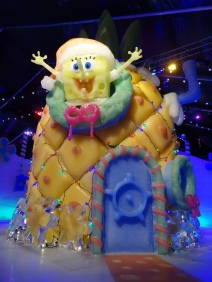 Before heading home, we had dinner at Gaido’s Seafood Restaurant, the largest fresh fish house along the Gulf coast. With over 100 years of seafood service in Galveston, this is the place we go when we want a view of the water and to be pampered in a lovely setting.

Houston is one of the most diverse cities in the United States and has a large number of Asian residents. Understanding the need to educate Americans about Asia, a group led by former First Lady Barbara Bush and former Ambassador Roy M. Huffington established Asia Society Texas Center in 1979.

I visited the Asia Society Texas Center when there was an exhibit of The Noh Masks of Bidou Yamaguchi. His 2005 mask of Johannes Vemeer’s “Girl with a Pearl Earring” was so unexpected! Can you imagine being behind the mask, trying to feel what she was thinking?

Oni Sadobo, 2011, was made of the treacherous monk from a famous Kabuki play. Very meticulous. Even the brown specks on his face replicated the foxing seen on the original woodblock print!

I couldn’t resist trying on a mask! Like it?

The Museum of Fine Arts Houston offers free general admission every Thursday. Lots of wonderful things to see. One of my favorite pieces is by Mary Cassatt. Mary was one of only two women and the lone American to join the Impressionists. Her close friend, Edgar Degas, encouraged her to join and what a gift she has given us! “Susan Comforting the Baby” is such a lovely snapshot of a typical moment in everyday life.

Really like this sculpture by Robert Rauschenberg, born just down the highway from Houston, in Port Arthur, Texas. Only then, he was called Milton. The chairs are really metal, assembled to appear wooden!

Interesting man. In the mid-1940s, Robert had planned to go into medicine, but after serving in the Navy, he enrolled in art school in Kansas. The following year, he went to Paris to study at one of the art Academies.

In the 1950s, Rauschenberg recyled found things like tissue paper and dirt into his art. Throughout the years, he designed costumes, sets and lighting for dance companies. He also founded or co-founded several organizations to help artists.

The Chinese Lunar New Year brought out some beautiful clothes. This shy young boy was kind enough to stop a moment and let me take a picture. (As with any recognizable close-ups of children, I ask their parents or guardians for permission first.)

We head north to spend time with relatives. It snowed, which doesn’t happen often in the Houston area. It was lovely!

This is also the month trail riders and wagons start the trek to Houston’s Livestock Show & Rodeo! It can take weeks for some teams. This particular team, Los Vaqueros Rio Grande, drove their five wagons the farthest: 386 miles!  It starts in Reynosa, Mexico, crosses into Hidalgo, Texas and comes right by our community on the three week ride into Houston. They have been riding into the HLSR for 42 years! I have only seen them go by our community THREE times in the 20 years we’ve lived here, so it was a real treat to take a quick shot as they rode by!

I went to Arizona to visit my old roommate. We celebrated Palm Sunday at an inspiring, bonding outdoor mass. (I’m Baptist, but she didn’t know of a Baptist church, and well, we worship the same God.) 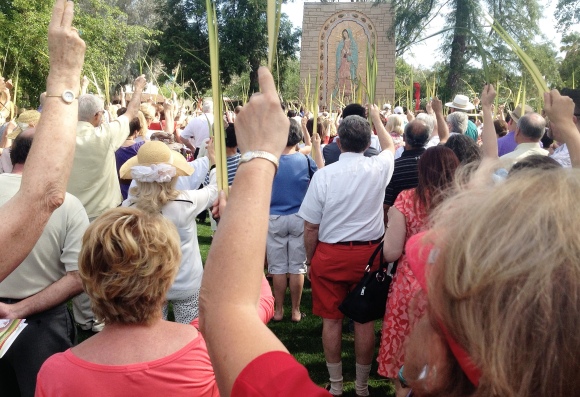 Afterward, we walked the Labyrinth at the Franciscan Renewal Center. The labyrinth is a physical representation of the journey of one’s life, including experiences, changes, discoveries and challenges. As you walk the path, you are invited to remember the story of your life. For medieval Christians who couldn’t take the long, hard pilgrimage, labyrinths were the alternative form for prayer. The seven circles are shaped like the Cross and you can walk it any way you like.

This particular labyrinth was designed by Taffy Lanser, a founding member of the international Labyrinth Society.

We also went to a festival in Scottsdale.The theme might have been Spain. They had gorgeous Andalusians (Pure Spanish Horses) walking about, singers and (I think) flamenco dancing. Gorgeous desert blooms! 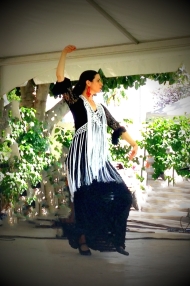 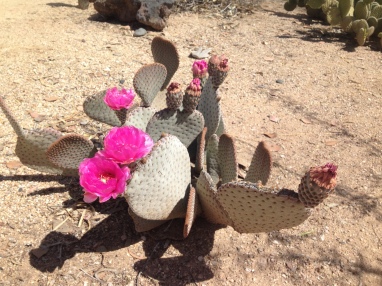 The only down side of the trip was when I was catching a flight back. I had just found out I had to change my flight and leave a day earlier, which was that day! The flight was moved to two hours before take-off and I rushed to find a taxi to take me to the airport. Compared rates and went with Discount Cabs. BIG mistake! Wished I’d taken the time to research it. I gave location and destination and was given an approximation, give or take a few dollars. The cab was late, it didn’t look like a cab, and the driver was new. I had to get in or miss my flight. When I asked the driver why he was so late, he said he didn’t take his phone in when he had to stop at a store. NOT very professional. The final bill was $17 more than the quote. I lost a few minutes trying to speak with a supervisor about the outrageous overage. Three people later, no refund. So, the moral of the story is to use Yelp or check the Better Business Bureau or Google search (or ALL of them!) when comparing prices. The least expensive may not be such a bargain in the long run. Beware Discount Cabs!!!